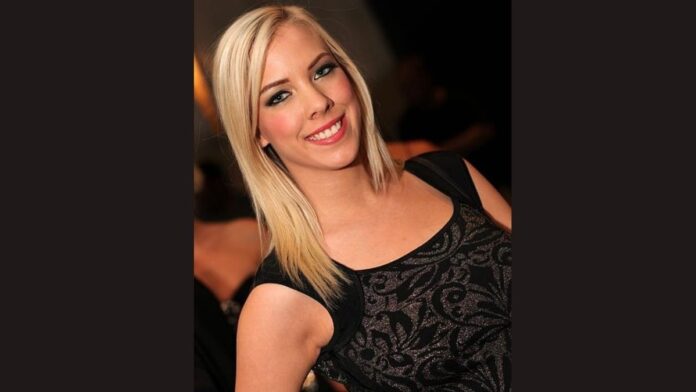 BiBi Jones is an American pornographic film actor. Jones was born on 23 July 1991 in Oklahoma City, Oklahoma, United States of America. Bibi was born with the name, Britney Maclin but she choose the name Bibi Jones as her stage name.

Born in 1991, Bibi Jones is 30 years old as of 2021. She started out in the adult industry as a nude model and stripper shortly after turning 18. She first began performing in explicit hardcore movies at age 19 under the name Britney Beth in October of 2010. She signed with Digital Playground in December 2010. She has appeared in X-rated features for such companies as Brazzers, New Sensations, and Pure Play Media. Jones was nominated for both an AVN Award for Best New Starlet and an XRCO Award for New Starlet in 2012. She also won the AVN Fan Award for Hottest Sex Scene that same year. She stands at 5′ 6¼” (1.68 m) in height.

Jones announced her retirement from the adult industry on July 17, 2012. However, Bibi Jones officially came out of retirement on February 5, 2013, and has resumed working with Digital Playground.

Bibi Jones made the news some time ago with Rob Gronkowski. Gronkowski, nicknamed “Gronk”, is an American football tight end for the Tampa Bay Buccaneers of the National Football League. He previously played nine seasons for the New England Patriots.

She says she slept with Phoenix Coyotes’ player Paul Bissonnette, even though he’s denying it, and has been with Atlanta Braves second baseman Dan Uggla, as well as numerous others that she can’t divulge because some are married. She also says an agent in Phoenix used to have her sleep with potential clients so they would sign with him.Bibi Jones joined 98.5 The Sports Hub in Boston with Toucher and Rich to discuss how she met Gronkowski, the pictures with her wearing his jersey, watching her films with Gronkowski and his friends, why nothing happened between the two of them, her attraction to Gronkowski and other stars that she has been with.

Bibi Jonas said -“I just met him this weekend ’cause we have mutual friends who played football with him at the University of Arizona”, when asked How long have you known Rob.

When asked how she got the Patriots’ jersey from a guy she just meet, Bibi Jones said,- “I didn’t know who he was. My friends just invited me over and we were all hanging out and he’s like this huge dude. I didn’t know who he was so I asked him what he did for work, so he told me, and I was like, ‘That’s cool.’ We ended up, it was like me and six or seven other guys and him and we ended up watching one of my movies.”

Presenter asked, “But you’re saying that nothing happened?:

Bibi Jones answered again- “Nothing happened. I wish something had, but nothing happened. … I asked if I could have some pictures with him and he said, ‘Yeah, wait, put on my jersey.’ I said, ‘OK.’ We were taking pictures. I asked him if I could put it on Twitter because some athletes wouldn’t want that since I do do adult films and they don’t want to be associated with that. He was really cool with it because I have more Twitter followers than him.”

Check out full Interview from here

It led to a Gronkowski apology that was really unnecessary, but social media blew the story up. Per NESN:

I didn’t intend anything to hurt the reputation of anyone on the New England Patriots, or on behalf of Robert Kraft. That’s all. It was just a simple picture. That’s all. From here on out, I’m just here to talk about the Pittsburgh Steelers and the big game this weekend.

He continued apologizing, and well be left shaking his head for awhile because this story isn’t going to die anytime soon.