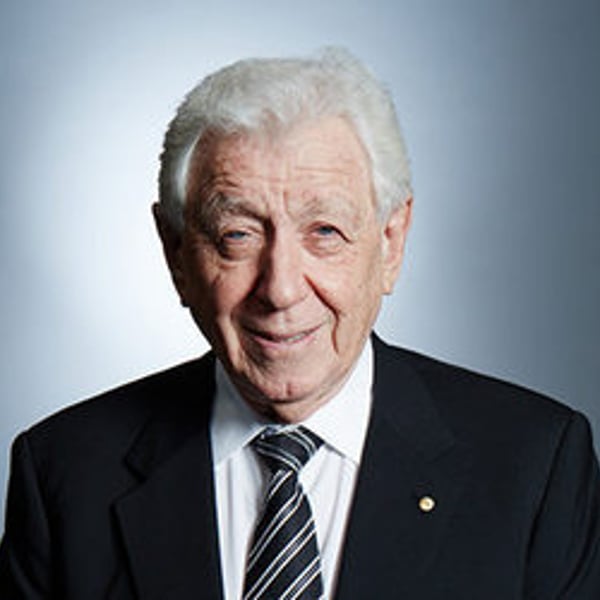 Lowy was born in Czechoslovakia (now Slovakia), and after being forced to live in a ghetto in Hungary during WWII, he fled to France in 1946, where he boarded the ship Yagur bound for Mandatory Palestine. However, he was apprehended by British authorities on the way and interned in a detention camp in Cyprus. Lowy joined the Haganah, then the Golani Brigade, and fought in the Galilee and Gaza during the 1948 Arab-Israeli war.

Sir Frank P. Lowy AC is an Australian-Israeli businessman of Jewish Slovakian-Hungarian ancestry and the former long-term Chairman of Westfield Corporation, a global shopping center company with US$29.3 billion in assets under management in the US, UK, and Europe.
Lowy left Israel in 1952 to join his family, who had fled Europe for Australia and started a small-goods delivery business. Lowy was appointed a Director of the Reserve Bank of Australia in 1995, reappointed in 2000 and 2003, and served until 2005.

Lowy married Shirley Rusanow in 1954, after meeting her at a Jewish dance when he was 21 years old. They have three sons: Peter and Steven, who run the Westfield company, and David, who oversees the family’s private investments. His wife founded the Chai Foundation, which is dedicated to discovering and funding research into effective but less toxic cancer treatments. His son Peter is the chairman of Tribe Media Corp, the parent company of the Jewish Journal, and has previously served as the chairman of the University of Judaism.

Frank Lowy has an estimated net worth of approximately $6.8 billion as at 2022 per information from Forbes.