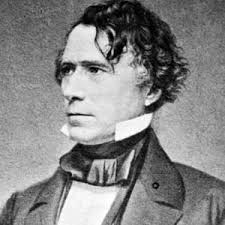 Franklin Pierce was born in a log cabin in Hillsborough, New Hampshire on November 23, 1804.
Benjamin, his father, was a lieutenant in the American Revolutionary War. Pierce enrolled as one of 19 freshmen at Bowdoin College in Brunswick, Maine, in the fall of 1820.
Pierce briefly studied law in Portsmouth, New Hampshire, with former New Hampshire Governor Levi Woodbury, a family friend.
He then spent a semester at Northampton Law School in Northampton, Massachusetts, followed by a year of study under Judge Edmund Parker in Amherst, New Hampshire, in 1826 and 1827. In late 1827, he was admitted to the New Hampshire bar and began practicing in Hillsborough.
Pierce married Jane Means Appleton, the daughter of Congregational minister Jesse Appleton and Elizabeth Means, on November 19, 1834.
They had three sons together, but all of them died when they were young.

From 1853 to 1857, Franklin Pierce served as the 14th president of the United States. He was a northern Democrat who thought the abolitionist movement posed a serious danger to the country’s unity. By approving the Kansas-Nebraska Act and enforcing the Fugitive Slave Act, Lincoln alienated abolitionists, and tensions between the North and the South lasted until southern states seceded and the American Civil War broke out in 1861.

Before being elected to the Senate in March 1837, where he served from March 1837 until his resignation in 1842, he served in the U.S. House of Representatives from 1833 until that time. Success in his own business led to his selection as New Hampshire’s U.S. Attorney in 1845. As an Army brigadier general, he participated in the Mexican-American War.

Pierce’s drinking harmed his health in his final years, and he became more spiritual.
Pierce’s health began to deteriorate again in mid-1869, and despite his deteriorating physical condition, he resumed heavy drinking. He returned to Concord that September, knowing he would not recover from severe cirrhosis of the liver.
He died on Friday, October 8, 1869, at 4:35 a.m., at the age of 64.