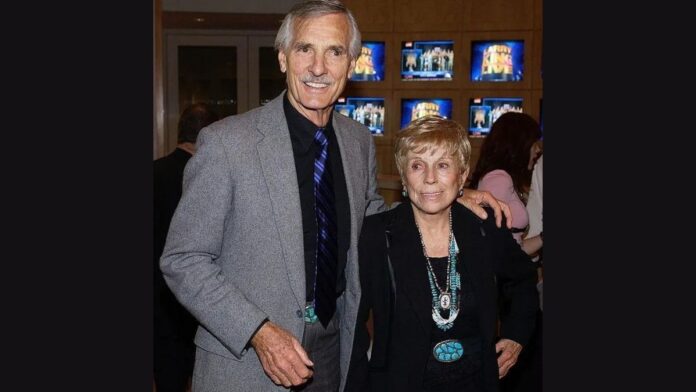 Geraldine Stowell is the wife of Dennis Weaver. Geraldine Stowell’s husband, Weaver was an American actor and former president of the Screen Actors Guild, best known for his work in television and films from the early 1950s until just before his death in 2006.

Born Geraldine Mae Stowell in St. Louis on June 27, 1925, Geraldine Stowell was the wife of Dennis Weaver. She died at the age of 91 on 26 Apr 2016 at her Ridgway home and surrounded by loved ones. Billy Dennis Weaver and Garaldine were college sweetheart, in 1945, and they maintained a loving, dedicated marriage for 60-plus years, until his ascendance in 2006.

Dennis and Geraldine Stowell met at a Joplin Junior College sock-hop in 1942. She was a figure roller-skater and wore one of her skating outfits to the dance.

When the pair danced their way into each other’s direct line of sight, Dennis gave “a powerful whirl” that kicked up her skirt, revealing a pair of legs that took Weaver’s breath away. Gushing about it in his book, Weaver wrote:

“That was the beginning of a grand partnership that has lasted more than fifty years. She has truly blessed and enriched my life.”

Three years of dating followed before they got engaged and married, all on the same day! Weaver proposed to Geraldine Stowell at a football game, and the lovebirds drove through to the justice of the peace in Columbus that evening.

Though Dennis became a celebrity, she was always the real star of her family and the driving force behind his success. Geraldine Stowell and her husband, Dennis discovered Ridgway in 1988 and felt an instant connection. They bought property on their very first visit, built the groundbreaking Sunridge Earthship, and spent the rest of their lives here, enjoying this special Town and its wonderful people.

Geraldine Stowell’s generosity was unbounded — over the years she was a significant contributor to many local organizations and events, and if not for her, the Weaver Memorial Park would not have become a beautiful part of Ridgway.

Rob and Rusty also pursued careers in entertainment. In his book, Weaver revealed the “secrets” of a longlasting marriage and wrote:

“When we truly love someone, we allow them their thoughts, interests, and space. We give each other room to breathe.”

Dennis Weaver’s 2001 autobiography, All the World’s a Stage, revealed a spiritual person as Weaver explored environmental concerns, events that could have led to his death, and what he treasured most – his six-decade-long marriage to his wife, Gerry.

Geraldine Stowell Weaver joined her husband in the entertainment business as an actress and is known for “Gentle Ben,” “The Mike Douglas Show,” and “This Is Your Life.”   Geraldine Stowell’s husband, Dennis Weaver was a vegetarian since 1958 and student of yoga and meditation since the 1960s and a devoted follower of Paramahansa Yogananda, the Indian guru who established the Self-Realization Fellowship in the United States

Geraldine Stowell’s husband, Weaver died of complications from prostate cancer at his home in Ridgway, Colorado, on February 24, 2006. 10 years later she also joined him.