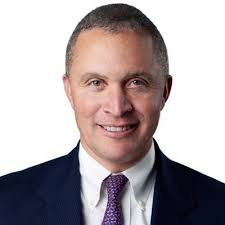 Harold Eugene Ford Jr was born on May 11, 1970 and will therefore be 52 years by the end of 2022. He was born and raised in Memphis, Tennessee in the United States. He was born to Democratic former member of the United States House of Representatives, Harold Ford Sr. He has four siblings including two half-siblings.

His family is well known for their funeral home started by his grandfather especially in the black community.

Harold Ford Jr got married to Emily Threlkeld on April 26,2008 and have two children together.

Harold Eugene Ford Jr is a former United States congressman from Tennessee’s 9th congressional district, located in Memphis, who served as a member of the Democratic Party from 1997 to 2007. He is the son of former Congressman Harold Ford, Sr., who served in the same position for 22 years. Ford ran for the Senate seat vacated by retiring Bill Frist in 2006, but was unsuccessful. He was the Democratic Leadership Council’s most recent chairman (DLC).

Harold Eugene Ford Jr has an estimated net worth of approximately $3 million.