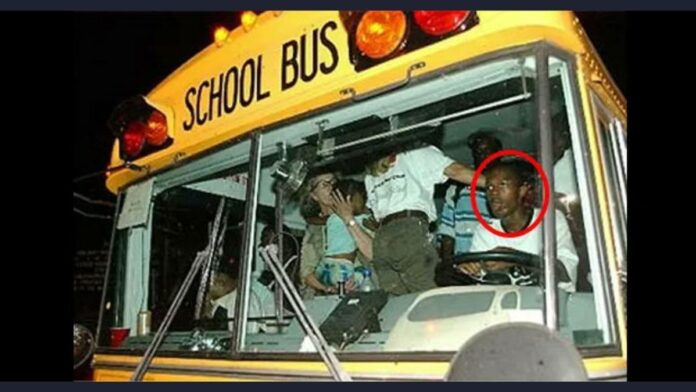 Who is Jabbar Gibson? Jabbar Gibson- also known as Jabbor or Jabar– is a New Orleans resident who came into the limelight after Hurricane Katrina destroyed much of the city’s infrastructure. Jabbar Gibson stole an abandoned New Orleans school bus from the flooded area and drove victims to Houston, Texas. He was 18 years old at the time.

Jabbar Gibson during Hurricane Katrina took the wellbeing of the community into his own hands and single-handedly evacuated more than 70 people to safety.

Two days after the levees broke in New Orleans in August 2005, the Houston Astrodome was opened to take in the victims of Hurricane Katrina. When the first busload of evacuees from the flooded city arrived, authorities were surprised to see 20-year-old Jabbar Gibson sitting behind the wheel.

Jabbar Gibson was a young Black man who lived in the Fischer Projects that formerly stood in New Orleans’ Algiers neighborhood.

Dilapidated before the storm ever arrived, the Fischer sustained serious damage from Hurricane Katrina. Fallen trees had gouged large chunks from housing units. The winds shattered windows, destroyed wooden fences, lifted tile from the roof, and even ripped pieces out of the building’s brickwork. For two days Jabbar Gibson, along with his friends and family, lived amongst the wreckage without power, food, or the assurance that anybody was coming to help them.

When word spread that other neighborhoods–the Ninth Ward, Bywater, Mid-City– were being swallowed by floodwaters, Jabbar Gibson and a small group of Fischer residents began thinking of ways to escape. “We were desperate,” said Kerry Lavinette, a longtime resident of Fischer. “It was either that or we were going to drown.”

Gibson and some friends went out to look for help and came across a barn with a dozen abandoned school busses parked inside. They found keys to the busses in an unlocked office and after half an hour got one of the busses to start. Like many residents of the Fischer, Jabbar Gibson did not own a car and never received his driver’s license, much less the certification to drive a bus. “I learned right then and there,” says Jabbar Gibson, “I was driving alright for the first time.”

Now with the means for escape, Gibson and his friends returned to the Fischer and began loading people onto the bus. That’s when the police arrived.

They made everyone get off the bus and demanded that Jabbar Gibson hand over the keys. Nonetheless, Jabbar Gibson’s mother, Bernice, managed to convince the officers that giving Jabbar the keys and letting him take control of the bus was necessary to evacuate people who were in dire need of help. Seeing the severity of the situation, and unable to provide any assistance themselves, the police returned the keys to Jabbar and told him to get out of the city.

During their trip, Jabbar Gibson reportedly took approximately 70 passengers on the seven-hour drive to Houston, stopping for fuel three times after, he said, “we passed a hat around until we had enough money.”

Jabbar Gibson’s resourcefulness had finally earned him praise and media attention instead of a rap sheet. He said he got to meet Will Smith, Oprah Winfrey, and Spike Lee, among others. His bravery earned him the kind of admiration that eluded even public officials and police officers.

“To some he is a thug,” read the headline of his hometown newspaper, the Times-Picayune, on Oct. 16, 2005, “but to the 60 people on the school bus he commandeered as Hurricane Katrina’s floodwaters rose, Jabar [sic] Gibson is nothing short of a hero.”

He recounted the story of stealing the bus for all of the major cable networks. He got to meet Oprah and claims that she promised him a home and some money for his family. (“She gave me a big hug,” Gibson said.) Dozens of people around the country pledged their support to him.

Notoriety followed when it was reported Jabbar Gibson could have potentially faced charges for driving the vehicle illegally.

Gibson already had an extensive criminal history, including numerous arrests and a prior conviction for possession of a stolen automobile. He had two pending cases before Hurricane Katrina, for possession of cocaine and for aggravated assault with a firearm. He was released from jail on the assault charge nine days before the storm hit.

Where is Jabbar Gibson today?

In the years after, Jabbar Gibson picked up more charges: On January 9, 2006, he was arrested by New Orleans narcotics detectives and federal agents and subsequently indicted on federal charges relating to possession of cocaine, heroin, and a revolver. He was sentenced to fifteen years in prison and was released in August 2015.

He doesn’t plan to live in New Orleans. “I’m gonna live in Baton Rouge,” he said. “I gotta change my people, places, and things.”

Gibson said he’ll try to get back into construction work, or failing that, maybe try to apply for a commercial driving license. He’s got some experience driving large vehicles. Much has not been heard of Jabbar Gibbson in recent years.