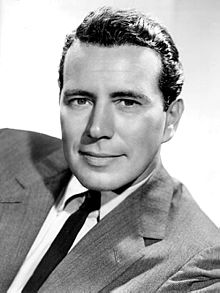 Forsythe, the eldest of three children, was born on January 29, 1918, in Penns Grove, New Jersey, as John (or Jacob) Lincoln Freund.
He grew up in Brooklyn, New York, where his father worked as a Wall Street businessman during the 1930s Great Depression. At the age of 16, he graduated from Abraham Lincoln High School in Brooklyn and enrolled at the University of North Carolina at Chapel Hill.
He took a job as the public address announcer for Brooklyn Dodgers games at Ebbets Field in 1936, at the age of 18, confirming a childhood love of baseball.

John Forsythe was a six-decade-long American stage, film, and television actor, producer, narrator, drama teacher, and philanthropist. He also appeared as a guest on a number of talk and variety shows, as well as as a panelist on a number of game shows.
His film acting career began in 1943. At the age of 25, he signed a minor contract with Warner Bros.
He also had a long and successful television career, starring as the single playboy father Bentley Gregg in the sitcom Bachelor Father (1957-1962), as the unseen millionaire Charles Townsend in the crime drama Charlie’s Angels (1976-1981), a role he reprised in the 2000 and 2003 film adaptations, and as patriarch Blake Carrington in Dynasty (1981–1989).

Julie Warren, Forsythe’s wife of 51 years, died of cancer at the age of 74 in a hospital after Forsythe decided to turn off her life-support system. She had been in a coma due to severe breathing problems.
Forsythe married businesswoman Nicole Carter at Ballard Country Church in July 2002; they were married until his death. Nicole Carter Forsythe passed away just five weeks after her husband.
Forsythe died of pneumonia on April 1, 2010, in Santa Ynez, California. He was laid to rest in Oak Hill Cemetery in Ballard, Santa Barbara County, California.