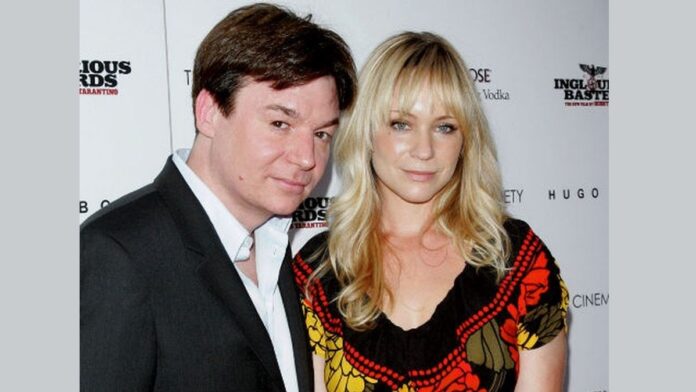 Kelly Tisdale is the wife of Mike Myers. Kelly Tisdale’s husband Myers is a Canadian actor, comedian, director, producer, screenwriter, and singer. He is known for his run as a performer on Saturday Night Live from 1989 to 1995 and for portraying the title roles in the Wayne’s World, Austin Powers, and Shrek film franchises. Kelly Tisdale is a businesswoman.

Kelly Tisdale is the wife of the legendary American comedian and actor Mike Myers, the actor returning to the screen in the revival of one of the hit television shows of the 70s, The Gong Show. Kelly was born in March 1977. She is currently 42 years old as of 2019.

How did the couple meet and start their beautiful relationship that lead to marriage? Mike and his wife have not given any information regarding how they met and started their relation. However, in 2010, Tisdale and Myers tied the knot in a secret ceremony. They have been together ever since, and have welcomed three children together: a son named Spike, born in 2011, not long after the couple’s top-secret wedding, a daughter named Sunday, born in 2014, and youngest daughter Paulina, born in 2015.

Both Tisdale and Myers have kept their family life very private, and don’t often speak out in interviews — but for Myers, who spent so much of his early life in the spotlight, that might be the perfect scenario.

Mike Myers’ wife Kelly Tisdale is a highly educated woman and graduated from Suffolk University, with a degree in government and international affairs. Although Tisdale is not an actress, she has worked in the entertainment industry as a scenic artist, and prior to her relationship with Myers, she dated the singer Moby. Kelly Tisdale started her own restaurant, Teany Café in the Lower East Side in New York which she co-owns with her former boyfriend, Moby. Moby, The DJ, known for his vegan lifestyle, has a couple of vegan restaurants. The café was famous for its teas and vegan menu.

However, a small fire broke out in Teany in 2009 which caused minor damage. Moby said it was Kelly’s decision to rebuild it. They reopened it in 2010 but the café closed for good in 2015. The Teany brand is now a beverage company in London. It’s not known whether Tisdale is still associated with Teany or if she has any other business ventures.

Kelly Tisdale is the second woman Mike Myers got married to. Before Kelly Tisdale, Mike Myers was in a longtime relationship with Robin Ruzan, an actress and comedy writer. The two started dating in the eighties, before Myers was a celebrity, and got married in 1993. They remained married until 2005 when Myers filed for divorce. Myers and Ruzan didn’t have any children.

After some months of their separation, Kelly Tisdale was spotted vacationing with the actor, Mike Myers in Hawaii.

Later Kelly Tisdale confirmed the relationship to the National Enquirer and expressed her surprise that the media didn’t find it earlier which meant that they had started dating earlier.

In March 2019, Mike gifted Kelly a special prize which he achieved from the annual Art Production Fund gala. The special prize was a dress which had a worth of US $ 9 thousand or around Rp. 128 million.