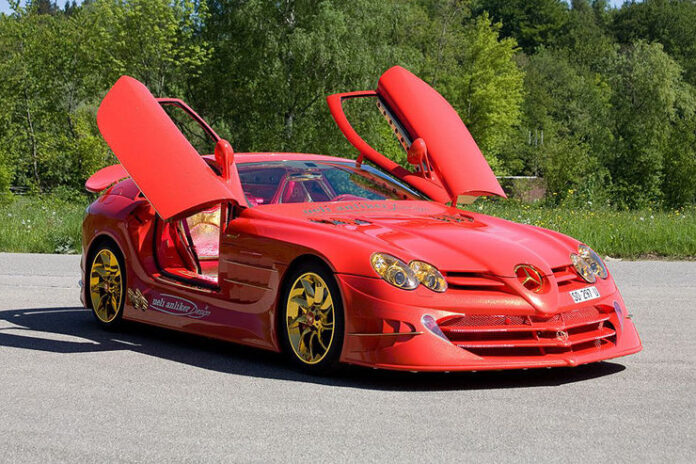 Mercedes Benz SLR McLaren was one of the greatest supercars of the middle 2000s when it was first unveiled. The car was the product of a partnership between Mercedes Benz and McLaren. It was offered to customers in both coupe and convertible forms and a hardcore version known as the Mercedes Benz SLR McLaren 722 edition was later unveiled. Another special edition version known as the Stirling Moss, which was named after one of the most successful Mercedes racing drivers, was also released. The Stirling moss came with no roof and no windshield.

The SLR was already an expensive car when it first came out and prices are now in the $350,000 range. Finding one in clear good condition will cost you over $500,000. The good thing about this car is that the value keeps going up by the day. This has caused one California real estate investor, Manny Khoshbin, to hoard about 9 of the car in his garage. No joke. He owns 9 Mercedes Benz SLR McLarens with the majority of them in silver color.

The SLR being beautiful from birth was not enough for one Swedish businessman who thought the car was too bland. The businessman, known as Ueli Anliker, decided to take his SLR truly his own by getting the team that built the SLR to customize his car into something only those with the weirdest imaginations will love. The team of 35 men took more than 30,000 man-hours to get the job done and the whole conversion was estimated to cost over $4 million.

The car was given 25 layers of the red paint job with an interior made of 5kg of gold dust. The wheels were also swapped for 24 Carat gold ones. The headlights and doorsills were also covered in gold. The steering wheel was also trimmed in gold with a jeweled speedometer. The gear lever was covered in rubies.

The design of the car was also altered to accommodate the increase in power. The SLR’s 5.4-liter engine was upgraded from 640hp to 999hp. This gave the car a top speed of 210mph, making it faster than the average SLR. After the conversion, the car was officially known as the ‘999 Red Gold Dream.

The car was however not received favorably by the automotive community. Its paint job was described by Top Gear as being one that could burn a hole through a person’s eye to their nightmares. The businessman himself later seemed to have grown fed up with his creation as he tried to sell the car. According to Ueli Anliker: “having invested about 5 million Swiss francs and more than 30,000 man-hours, the car is worth more than 10 million Swiss francs, which is the minimum selling price”

Ueli Anliker was asking for about $10 million before he would part with his ‘slightly modified’ Mercedes Benz SLR Mclaren.

However, he had a hard time finding a buyer for the car and although he was said to have received offers from prospective buyers in china and the middle east, there was no news of whether the car was sold in the end or not. Our guess is, he still has the car in his garage, waiting for a buyer with his asking price to show up.

If you are having more than $10million sitting around doing nothing and you are into weird-looking cars, maybe you should give Ueli Anliker a call. He might probably still have the 999 Red Gold Dream sitting in his garage and you could end up being the proud owner of one of the weirdest looking cars in existence.