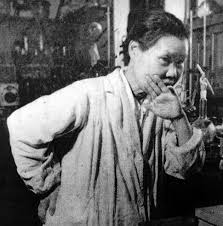 Michiyo Tsujimura was a Japanese agricultural scientist and biochemist who studied green tea components. She was Japan’s first woman to receive a doctorate in agriculture.
Tsujimura’s research career began in 1920, when she began working as a laboratory assistant at Hokkaido Imperial University.
She studied the nutrition of silkworms there before moving on to the Medical Chemical Laboratory at Tokyo Imperial University in 1922.
Tsujimura isolated the flavonoid catechin from green tea in 1929. In 1930, she extracted tannin crystals from green tea.
In 1956, she received the Japan Prize of Agricultural Science for her research on green tea, and in 1968, she was awarded the Order of the Precious Crown of the Fourth Class. She died on June 1, 1969, at the age of 80, in Toyohashi.