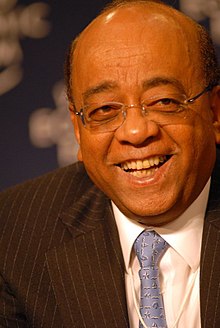 He was born on May 3, 1946, in Sudan, the second of five children, four of them were boys.
Ibrahim holds a bachelor’s degree in electrical engineering from Alexandria University. He returned to Sudan and began working for Sudan Telecom, a telephone firm. He moved to England and got a master’s degree in Electronics and Electrical Engineering from the University of Bradford, as well as a PhD in Mobile Communications from the University of Birmingham.

Mohammed “Mo” Ibrahim is a Sudanese-British business magnate. He worked for many telecoms firms before launching Celtel, which had over 24 million mobile phone subscribers in 14 African countries when it was sold. After selling Celtel for $3.4 billion in 2005, he established the Mo Ibrahim Foundation to promote improved governance in Africa, as well as the Ibrahim Index of African Governance to assess governments’ performance. He also serves on the London Business School’s Africa regional advisory board.

Ibrahim married Hania Morsi Fadl in 1973, a year above him at Alexandria University, whom he had known since infancy. They are now divorced, and Fadl works as a Sudanese-born British radiologist at Sudan’s only breast cancer center.
They have two sons, Hosh and Sami Ibrahim, and a daughter, Hadeel Ibrahim, who is executive director of the Mo Ibrahim Foundation, vice chair of the Africa Centre in New York, and a board member of the Clinton Foundation.
Ibrahim currently resides in the United Kingdom.

As per information from Forbes, he has an estimated net worth of approximately $1.2 billion as at 2022.