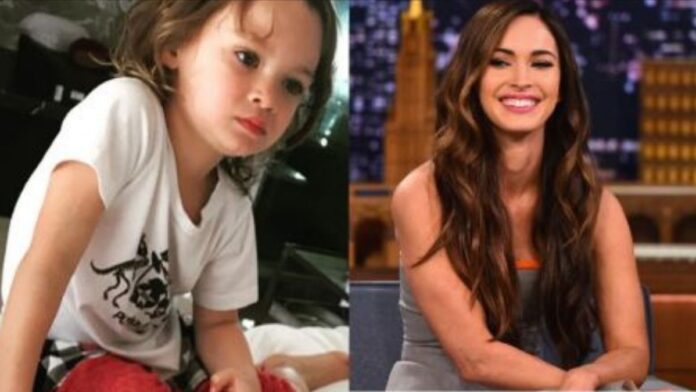 Noah Shannon Green is the son of Magan Fox and her ex-husband, Brian Austin Green. Noah Shannon’s mother Fox, is an American actress and model. She has made multiple appearances in major film franchises, most notably the Transformers franchise, as well as numerous magazines such as Maxim, Rolling Stone, and FHM. Noah Shannon Green’s father, Brian Austin is an American actor, producer, and former rapper, best known for his portrayal of David Silver on the television series Beverly Hills, 90210. Green was also a series regular on Terminator: The Sarah Connor Chronicles, Freddie, Wedding Band, and Anger Management.

Noah Shannon Green is 9-year-old as of 2021. The boy was born on 27th September 2012, in the United States of America but the exact location has not been made public. His zodiac sign is Libra.

Her pregnancy news came when the actress was seen flaunting her baby bump in Hawaii along with her hubby.

The doting mother Megan revealed the news of her baby’s birth nearly a month after on her Facebook on 7th October. She wrote,

“We have been very lucky to have had a peaceful few weeks at home, but I would like to release this myself before others do. I gave birth to our son Noah Shannon Green on September 27th. He is healthy, happy, and perfect.” She continued-“We are humbled to have the opportunity to call ourselves the parents of this beautiful soul and I am forever grateful to God for allowing me to know this kind of boundless, immaculate love.”

Noah Shannon didn’t make an appearance until he was six months old. On March 29, 2013, he was first seen in New York with his father Brian. At that moment, the actor was seen strolling with his child. Noah Shannon Green is not the only child of his parents. He has two younger brothers named Bodhi Ransom Green, born in 2014, and Journey River Green, born in 2016. Besides, Noah also has the older step-brother Kassius Lijah from his father’s previous marriage with Vanessa Marcil.

Megan Fox is encouraging her son Noah to unapologetically be himself.

Appearing on an episode of The Talk, in which she opened up to the co-hosts about her 6-year-old little boy.

During the show, Fox discussed how Noah Shannon green is “really into fashion” and often wears whatever he wants to school, including dresses, despite receiving negative feedback from his classmates.

“So we’re going through that now, where I’m trying to teach him to be confident no matter what anyone else says,” Fox continued.

“He just wore one two days ago to school, and he came home and I was like, ‘How was it? Did any of the friends at school have anything to say?’” Fox recalled. “And he was like, ‘Well, all the boys laughed when I came in, but I don’t care, I love dresses too much.’”

Besides proudly dressing himself, the mother of three also revealed that Noah will occasionally provide input during her own clothing fittings — though sometimes, his suggestions aren’t always the most ideal.

“He designs, he draws outfits. He’s very talented,” she said of her son, Noah Shannon Green. “But he’s still 6 so, when I do fittings, like, I did one recently and I had this really beautiful yellow dress on, and he kept draping it in a way where he’s like, ‘If we do it like this, it looks like a diaper!’”

Through her laughter, Fox sweetly added: “I was like, ‘That’s not what we’re going for this time, but maybe next time!’”

“Does it affect you guys if you see people talking crap on it?” host Dax Holt wondered, referring to comments they may have gotten after Noah Shannon Green was seen out and about with his parents wearing a dress.

Fox didn’t skip a beat. “My son, he’s 4,” he explained at the time. “I’ve heard from some people that they don’t agree with him wearing dresses. To them I say, I don’t care. He’s 4 and if he wants to wear it, then he wears it.”

“And it’s dresses or goggles or slippers or whatever,” Fox continued. “It’s his life, they’re not my clothes … I feel like at 4, at 5, that’s a time when he should be having fun. He’s not harming anyone wearing a dress. So if he wants to wear a dress, good on him.”

How did Noah Shannon Green’s parents meet? Fox began dating actor Brian Austin Green in 2004, after meeting on the set of Hope & Faith; she was 18 years old, while he was 30. According to Fox, Green was initially hesitant to enter a relationship with her due to the age difference, stating, “I had to convince him that I was slightly more responsible and well-spoken and had other things to bring to the table besides being 18.” They became engaged in November 2006. In February 2009, Noah Shannon Green’s parents ended their engagement.

Later that year, Fox was targeted by a group of fashion-motivated criminals known as the “Bling Ring“, who robbed Green’s home for access to Fox’s possessions. Noah Shannon Green’s parents were reported to have gotten engaged again on June 1, 2010,] but Fox stated that she and Green had been continuously engaged since 2006.

Fox and Green married on June 24, 2010 in a private ceremony at the Four Seasons Resort on Maui. Fox filed for divorce on August 21, 2015, a few days after she and Green announced their separation. By early 2016, they were back together and expecting their third child. On April 25, 2019, Fox filed to dismiss the divorce in Los Angeles, California. In May 2020, Green announced that he and Fox had separated after nearly 10 years of marriage, and in November 2020, Fox filed for divorce from Green for a second time.