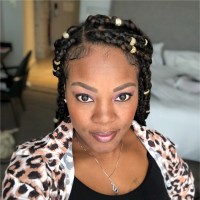 Tamika Parks was born in La Grange, Georgia on September 2, 1979 and is therefore currently 43 years old. She is African American.

She was born to a businessman and a certified phlebotomist which apparently influenced her interest and career choice in the medical field.

She is well known for her marriage to popular celebrity chef, Pat Neely, and have been married since October 7,2017. She has two children.

Pat Neely is an author, restaurateur, and television personality from the United States. He owns and operates Neely’s Bar-B-Que in downtown Memphis, Tennessee. Down Home with the Neelys and Road Tasted with the Neelys were two Food Network television shows he and his ex wife Gina hosted. They also collaborated on a cookbook. Down Home was the highest-rated premiere of any Food Network show in the “In the Kitchen” series, which airs on weekends.

Thanks Tamika Parks is an anesthesia specialist and a certified nurse.