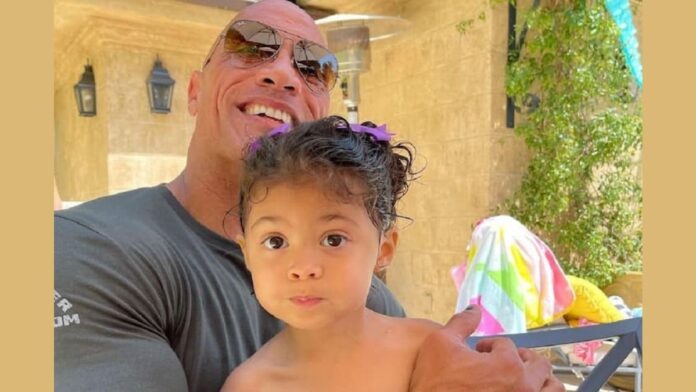 Tiana Gia Johnson was born on 2018 April 17 in Los Angeles, California. Her parents are Dwayne Johnson and Lauren Hashian. Gia is the second-born child to Lauren Hashian and the third born to her father.

How old is The rock’s daughter, Tiana Gia Johnson?

As of 2021, The Rock’s daughter, Tiana Gia Johnson is 3 years old. She is not the only child of her parents. Gia has two siblings, sisters Jasmine Johnson and Simone Alexandra Johnson. Her sister, Jasmine is five years old and turns six on December 16, 2021. Their elder sister, Simone Alexandra, is 20 years old in 2021. She was born on 2001 August 14 in Davie, Florida, United States.

Dwayne Johnson announced Lauren’s pregnancy of Tiana Gia Johnson to the world on December 11, 2017, via Instagram. In the post, he posted a picture with a caption:

Our Jasmine Lia would like to make a big announcement – IT’S A GIRL! @laurenhashianofficial and I are boundlessly grateful for this blessing as this spring we’ll welcome our second baby. Plus, Jazzy is excited to boss around and protect her lil’ sis And once again, big daddy is completely surrounded by beautiful oestrogen and loving, powerful female mana. All girls. Only dude. I wouldn’t have it any other way.

How did Tiana’s parents The Rock and Lauren Hashian Meet?

Tiana Gia Johnson’s father, The Rock met his current wife Lauren Hashian when he was filming his 2007 movie “Game Plan.” When the duo met, The Rock was still married to Dany Garcia, but the duo separated amicably in 2007, and he started dating Hashian. Tiana Johnson’s parents got married in a stunning secret ceremony in Hawaii on August 18, 2019.

Tiana Gia Johnson’s father took to Instagram to announce the good news to the millions…and millions (154 to be precise) of followers he has worldwide, sharing two photos from the intimate ceremony. The rock confirmed the news by captioning the photos of himself and his beautiful bride with “We do” and yesterday’s date, as well as confirming the location and saying that he is blessed, before tagging his wife and the photographer.

Who are Tiana Gia Johnson’s parents?

Tiana Gia Johnson’s parents are well-known celebrities in the entertainment industry. Dwayne, her father, is an actor, former professional wrestler, influencer, and producer. He was born in Hayward, California, on May 2, 1972, and turned 49 years old in 2021.

Tiana’s paternal grandparents are Rocky Johnson and Ata Maivia. Her father is a descendant of the Anoa’i family, a professional wrestler family from American Samoa. Rosey, WWE Hall of Famer Rikishi, Umaga, and WWE Hall of Famer Yokozuna are all family members.

On the other hand, Lauren Hashian, Tiana Gia Johnson’s mother, is a well-known singer and songwriter. She was born on September 8, 1984, in Lynnfield, Massachusetts. Lauren is 37 years old in 2021, and her zodiac sign is Virgo. She has been associated with the music industry since her a teenager. Her musical career began when at the age of 19, she transformed her dorm room at Emerson College into a private studio. Her father, Sib Hashian, was a drummer for the rock band “Boston”.

The Rock’s daughter, Tiana has grown into a strong and happy girl in the four years since the announcement. Fans reacted positively to Dwayne Johnson and Tiana Gia Johnson’s Instagram posts. Their bond is apparent, and they genuinely enjoy each other’s company. Tiana Gia Johnson is the third child of Dwayne “The Rock” Johnson. She has become an internet sensation due to her father’s social media posts. She is, however, still young and has much to offer in the future.

Though Tiana Gia Johnson doesn’t have a net worth yet, his father on the other hand has gathered a huge net worth for himself from his hard work. Tiana’s father Dwayne johnson is worth $280 million. We have no idea about her weight and other physical measurements but she seems to have a healthy weight.