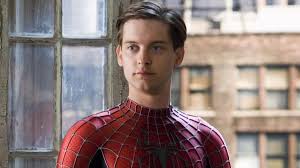 He had dreams of becoming a chef after his parents got separated as a child but was convinced by his mother to take drama classes.

He dropped out of high school to pursue an acting career. He did get his General Education Development(GED) later.

He has been in a relationship with popular Jewelry designer, Jennifer Meyer, since 2003, got married in 2007 and then got separated in 2016. They have two children together.

Tobias Vincent Maguire is an award winning actor and film producer from the United States. He is best known for his portrayal as Spider-Man in Sam Raimi’s Spider-Man trilogy (2002–2007), which he repeated in Spider-Man: No Way Home (2021), earning him the Guinness World Record for “longest career as a live-action Marvel character.”

He has made appearances in other movies such as The Great Gatsby, Pawn Sacrifice and The Boss Baby amongst others.

Tobias Vincent Maguire has an estimated net worth of approximately $75 million.