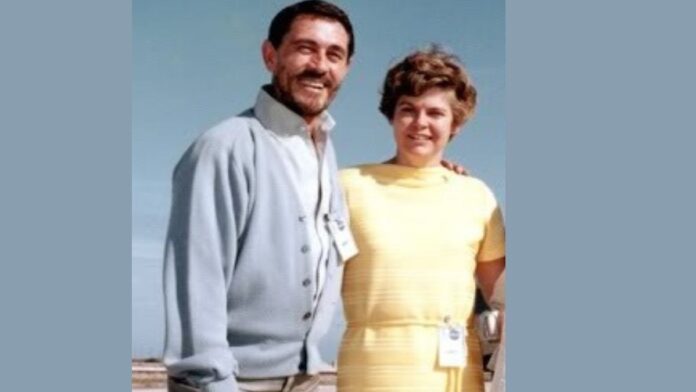 Torrie Ahern Connelly was the wife of Ken Curtis. Connelly’s husband, Curtis was an American singer and actor best known for his role as Festus Haggen on the CBS western television series Gunsmoke. Although he appeared on Gunsmoke earlier in other roles, he was first cast as Festus in season 8 episode 13, December 8, 1962 “Us Haggens.”

Torrie Ahern Connelly, Born July 31, 1929. She was the daughter of George Daniel Ahern and “Pat” Huntsman Ahern Gillespie. Torrie Ahern was born in Salt Lake City, UT, and she died November 2, 1997, at her home in Fresno, surrounded by family and friends.

It has been said that Torrie “never met a stranger”, so quickly did she turn an acquaintance into a devoted friendship. To be her friend, even if only briefly, was to be blessed with her constancy, dedication, humor, generosity, and faith in others. Helpmate to her beloved Ken “Festus” Curtis for almost 30 years and soul of the Professional Rodeo Cowboy’s Community for 20 years before that, she will be remembered by uncounted legions as “Mrs. Festus” or simply as the one-and-only Torrie, their best friend.

Torrie was preceded in death by her husbands, Lex Connelly and Ken Curtis.

Curtis married Torrie Ahern Connelly in 1966. The couple got married in a beautiful ceremony in the presence of their friends, family, and loved ones. They were married until his death in 1991

Before her marriage to Ken Curtis, Torrie Ahern Connelly was married to Lex Connelly.

Curtis died on April 28, 1991, in his sleep of a heart attack in Fresno, California. He was cremated, and his ashes were scattered in the Colorado flatlands.

In 1981, Curtis was inducted into the Western Performers Hall of Fame at the National Cowboy & Western Heritage Museum in Oklahoma City, Oklahoma.